Isn't it time you fixed that DRIP?

Too many companies are Data Rich, Information Poor. How can you democratise data skills to unlock value?

It may seem astonishing, but the phrase data rich and information poor (DRIP) was first coined in 1983 when it was used in a best-selling business book, In Search of Excellence, to describe organisations rich in data but lacking the processes to produce meaningful information and create a competitive advantage.

Fast forward 40(ish) years, to a Harvard Business Review (HBR) 2021 survey of senior corporate executives with oversight and responsibility for data in Fortune 1000 companies, which found that only 30% reported having a well-articulated data strategy and just 24% of respondents said that they thought their organisation was data-driven this past year, a decline from 37.8% the year before!

A UK Government study published in 2021, Quantifying the UK Data Skills Gap, found that almost half (46%) of companies have struggled to find data talent in the last two years.

Whilst most organisations have been investing heavily in data and AI initiatives – the same HBR 2021 survey found that 99% of the Fortune 1000 firms surveyed reported investment in these areas – it’s becoming increasingly clear that investment in the people side of data transformation has not matched up.

With organisations struggling to keep pace with data skills to effectively leverage the increasing volume of data, it’s no wonder that the phrase data rich, information poor is more relevant today than when it was first conceived.

It’s time for a new approach to unlock value from data.

It is estimated that 80+% of businesses are using Excel and there are somewhere between 1.5 and 2 billion users of Excel in the world. Which begs the question, how many people in your organisation are using Excel on a weekly basis? And how many are using it to its full potential? Unfortunately, in most organisations, it’s all too familiar to hear people exclaiming that they wish they knew how to use functions like pivot tables and conditional formatting in Excel or requesting the help of the go-to Excel whizz. Think how much potential there is!

Most data-led decision making in your organisation will not rely on complex data analysis. For example, if we consider a typical data question being asked by a senior leader such as ‘why are sales down?’, it is perfectly sensible for this analysis to be performed using Excel, a tool you’ve most likely already invested in and is widely accessible to your workforce. What’s lacking is the breadth of people with the Excel skills to carry out this analysis.

Analysing data is in itself not enough to drive data-led decision making, the best insights are uncovered when you have contributors who deeply understand the context of the data and the community that the analysis results sits within.

For example, Kate B, an HR Manager at a global payments company was interested in exploring how they could reduce the impact and cost of absenteeism in the business. She knew the HR department had the data to help understand this problem, but also knew it had never been fully explored or analysed.

With data at her disposal, Kate applied her new skills in statistical analysis to identify previously undetected patterns in absenteeism. Her analysis showed her that issues relating to child-care were driving absenteeism five times more than the HR team had realised. As a result, Kate was able to make cost-effective proposals on how to implement new measures to support staff who faced childcare issues, ultimately reducing absenteeism by 11%.

Departmental data champions are also well placed to be familiar with their team’s daily work and therefore able to easily identify the time-consuming tasks or processes that lend themselves to automation.

Research by McKinsey, looking at the suitability of tasks for automation, identified tasks such as data collection and data processing to be particularly well suited to automation. The research found that about 30% of the activities in 60% of all occupations could be automated. Meaning most workers — from mortgage brokers to CEOs — could be working more efficiently.

Creating data champions in every department not only enables them to self-serve the information needed for better decision making but also equips them with basic automation skills that will enable them to work much more efficiently.

“The UK Government report found that half of all workers surveyed reported they had not received any data skills training within the last two years despite considerable interest in undertaking training.”

When discussing data skills, it’s important to recognise that these extend beyond knowing how to functionally use a tool. Performing analysis to identify the most valuable insights depends on the right question being asked of the data in the first instance. We need people who come with more defined problem statements – so instead of ‘why is NPS down’ we could be asking ‘what effect has the recent outage had on customer sentiment’. Questions that are measurable and outcome-based give us insights that can be turned into actions.

Asking the right questions is only the first step; no matter how valuable your insights are, they’ll only lead to sound business decisions if they’re effectively communicated. Without strong communication and data storytelling skills, there is a high risk of unintentionally misrepresenting the data to other stakeholders, leading to at best, distractions and wasted time, and at worst, poor decisions being made that fail to deliver on the value expected.

As the amount of data being produced continues to increase at a staggering rate, organisations must act now if they are to develop the breadth and depth of data skills needed throughout their organisations to stop the DRIP and start unlocking value.

If you’re interested in this topic and would like to learn more, please sign up to one or more of our upcoming webinars in the Stop the DRIP! series. Alternatively, if you would like to discuss developing your data culture, please get in touch. 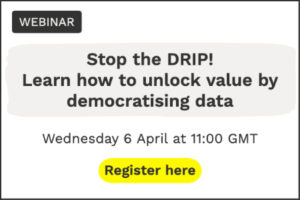 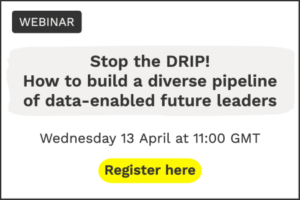 Want to find out more? Leave your details and we’ll be in touch.